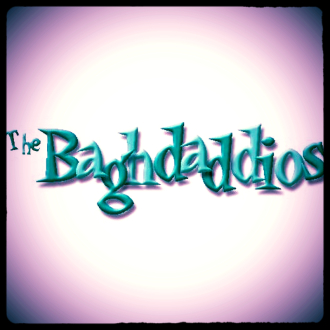 Formed in the NYC suburb of Nyack, NY in the early 1990s, The Baghdaddios found themselves trolling the murky underbelly of the indie and d.i.y. club circuit in nearby New York City, playing their third show ever at the famed "birthplace of punk", CBGB.  From there to Kenny's Castaways, the Bitter End, Don Hills and the infamous mid-town Siberia Bar, the group slowly built a reputation for fun and unforgettable showcases, stacked with original tunes and a flair for the frenetic.  Eventually working up to the release of their first album, "Willie Horton Hears A Who" in 1996, the band would eventually work their way up to touring the UK, the US Southwest, appearing at North By Northeast in their first-ever trip north of the border - and find their material on network cable TV, national radio, culturing an international following, to boot.

But that's never stopped them.  Nope.  The fact of the matter is: they're not in it for $s, groupies, fame, et al - they continue to rock after all this time for one reason and one reason alone:

They love what they do.  It's as simple as that.

Come with us now as we take a trip to Baghdaddio-ville - from their Hudson Valley infancy to their current City-based residency.  See the pics, view the videos, hear the riffs.  Meet their friends, get the scoop and find out when the next rare public appearance will happen.  This is the band that refuses to die.  Find out how and why!

Profiled for their charitable contributions (they're the guys behind the annual Blank-Fest Benefits that have spread to over 10 major metro areas in three countries) in their hometown's popular tabloid, The Daily News, the group continues to produce music and videos as they celebrate two decades of driving their neighbors and music critics everywhere crazy!

Recommend this page
© The Baghdaddios 2015